Harvey Kinsey, of Lake Wildwood, began showing signs of early onset Alzheimer's disease in 2001. By 2003, the advancement of the disease had accelerated, and the lifestyle of his entire family was being impacted. He fought for our country in the Pacific theater during WWII, or as he called it "the big one," but 60 years later, found himself in a battle with something every bit as intimidating. Harvey lost his battle with Alzheimer's in January of 2010.

My name is Keith, and I am Harvey's son. I began my involvement with the Alzheimer's Association shortly thereafter. Currently I am blessed to serve on the Board of Directors of the Illinois Chapter of the Alzheimer's Association. Seeing the fear in Dad as he realized what was happening was more challenging than I can describe. As the disease progressed, it became a bit easier for him as it grew much more saddening for our family. In January of 2010, after more than 3 years in a care facility, Dad lost his battle with Alzheimer's disease as we lost him 'for the second time.' Alzheimer’s disease is relentless, but so are we. Walk for someone you love! We would appreciate your support in the Alzheimer's Association Walk to End Alzheimer's®, the world’s largest event to raise awareness. Funds raised are used for Alzheimer’s care, support and research. Thank You!

Harvey fought for our freedom in WWII, but 60 years later, found himself battling something even more challenging, with no chance of winning. Thanks for Playing to end Alzheimer's disease! 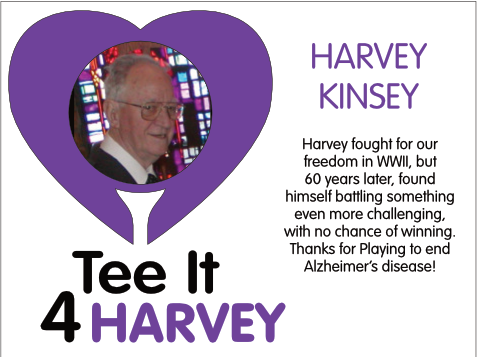